Srinagar, November 25 (KMS): In Indian illegally occupied Jammu and occupied Kashmir, 2,342 women were among 95,723 civilians martyred during the last 31 years due to the unabated acts of state terrorism by Indian troops. According to a report released by the Research Section of Kashmir Media Service, today, on the occasion of International Day […] 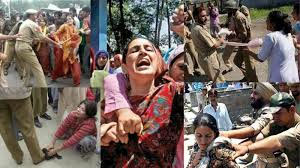 Srinagar, November 25 (KMS): In Indian illegally occupied Jammu and occupied Kashmir, 2,342 women were among 95,723 civilians martyred during the last 31 years due to the unabated acts of state terrorism by Indian troops. According to a report released by the Research Section of Kashmir Media Service, today, on the occasion of International Day for the Elimination of Violence against Women, Indian troops molested 11,224 women during the period. It maintained that the Kashmiri women have been the worst victims of the harrowing conflict, which rendered 22,923 women widowed since 1989. The report deplored that the troops had been routinely involved in sexual harassment of women to suppress the Kashmiris’ ongoing liberation struggle. It further pointed out that although men had been subjected to enforced disappearances, but women were adversely affected because of being related to the disappeared persons as mothers, wives, sisters and daughters. The report maintained that women constituted a considerable number of mental patients, which was well over one hundred thousand, due to the violence perpetrated by Indian police and troops in the occupied territory. The report said over a half dozen women including top women resistance leaders, Aasiya Andrabi, Fehmeeda Sofi and Naheeda Nasreen are under illegal detention in India’s infamous Tihar jail for the past four years while Insha Tariq Jan, Hina Bashir Beig, Haseena Begum and Naseema Bano, mother of a martyred Tawseef Ahmed Sheikh, remain lodged in different jails. Their families are worried about the well-being of their daughters during the time of coronavirus pandemic, it said. The report said that in Doda, a 90-year old Ghulam Mohammad Butt died last year with the wish to see for the one last time his daughter who was abducted by Indian troops with the help of two Special Police Officers at Dhar, Dhandal in Doda district in June 2000. The report deplored that Indian forces’ personnel are using molestation of women in the territory as a weapon of war to suppress the Kashmiris’ just struggle for securing their right to self-determination. It said that Kashmiris resistance leaders and human rights groups have been demanding impartial investigations into the cases of rape, murder and other human rights violations against women including Kunanposhpora mass rape and Shopian tragedy. Over 100 women were gang raped by Indian troops at Kunanposhpora in Kupwara in February 1991 while two women, Aasiya and Neelofar were abducted, raped and subsequently killed by Indian men in uniform in Shopian in May 2009. A 9-year old girl, Asifa Bano, was abducted and gang raped by Indian police personnel and fanatics affiliated with extremist Hindu organizations in Kathua area of Jammu region in January 2018.
Read More

‘India using molestation of women as a weapon of war in...